Video Game Music – Where to Plug Your Headphones In First?

I’ve been waiting a long while to start this article because of the project that I’ve been a part of. The goal of it was to create a Canon of video game music so that anyone who wanted to listen to VG music, would have a good place to start.

END_OF_DOCUMENT_TOKEN_TO_BE_REPLACED

The cliche move of walking to your local garage sale to find old discarded NES games is becoming a thing of the past.

With countless new generations of video games falling into the laps of today’s youth, old cartridges are becoming harder to find. I know I’d never give up my old games, but some people don’t know the value of what they hold in their hands. To raise awareness for collectors, I’m going to go over just how our beloved NES and Genesis games are meeting their end.

Garage sale decline: By now, the peek season for buying old games at garage sales has pretty much passed. The generation that played those games as kids are now END_OF_DOCUMENT_TOKEN_TO_BE_REPLACED

A little over two weeks ago, we here at Continue?, introduced you to a very skilled musician named Freddie25 (you can see that article here). This week, we Continue? our series of awesome videos with another incredibly skilled musician named HIKAKIN. HIKAKIN is a 21-year-old beatboxer, from Japan. On August 21st, he posted a video on his YouTube channel of him beatboxing a song from Street Fighter 2.

-Check the video after the bump-

END_OF_DOCUMENT_TOKEN_TO_BE_REPLACED

Awesome Video of the Week!

Good Evening loyal fans of Continue?, how are you all doing today? Me, I’ve been swamped with work, fighting crime, and playing Star Craft 2, that I haven’t written any articles in a while, and have once again allowed the Video of the Week to slip away from me. However, I finally am sitting down, and taking the time to write after going on a bit of a hiatus.

This weeks video shows a YouTuber who goes by the name of Freddie25, playing a medley  of video game music. Before you say anything, I know, that isn’t very awesome, there are lots of video of video game medley. Freddie25 however, does it with a bit of a twist. He has constructed a medley of Video Game Songs with Lyrics. Freddie25 has taken popular Video Game Songs with Lyrics by artists such as Brentalfloss (any Megaman with Lyrics video and Tetris with Lyrics) and Martin Hagwell (Super Mario RPG Song), and blended them together into a very clever and unique sounding medley.

This is what happened to me when I first saw the video.

-Check the Video after the bump-

END_OF_DOCUMENT_TOKEN_TO_BE_REPLACED 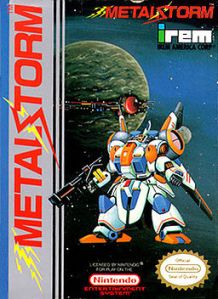 Metal Storm is a lesser-known game from developer Irem, better known as the creators of the R-Type series.  While it shares some similarities in design and pacing to R-Type, it also happens to be one of the most unusual platformers ever to grace the Nintendo Entertainment System.  Even now, platformers featuring player control of gravity – such as Nintendo’s Super Mario Galaxy – are considered revolutionary.  Truly, Metal Storm was ahead of its time. END_OF_DOCUMENT_TOKEN_TO_BE_REPLACED

So with Dan enjoying the sun in Mexico, I figured it was about time I stepped up and actually contributed to our wonderful retro gaming website. Since I’ve been drowning in some of the newer side-scrolling adventure games available on STEAM, I needed to take a step back and think of the games that really made an impact on me as a kid.

What was the first game that came to mind, you ask? None other then Kirby’s Adventure for the NES. I looked up a few videos on that old game, just to reminice what I’ve been missing over the years, and I came across this fairly recent stop motion version of that game, and many other favorites from the early days of 8-bit gaming.

It’s surprising how many times top composers end up making this list. Here’s another game that you would most likely never want to play unless you were some hardcore retro gamer, a comic book/game fanatic, or just a sadist. But the soundtrack of it should give you some more reason to suffer.