The Politics of Final Fantasy

While the numbered Final Fantasies stand out in everyone’s mind; I’m going to talk about one that is a little less known and that was probably overshadowed by the hit of 1997 : Final Fantasy Tactics.

This article contains spoilers, please read at your own discretion. This will also be accompanied by a Let’s Play video detailing the major events of Final Fantasy Tactics Act I.
END_OF_DOCUMENT_TOKEN_TO_BE_REPLACED

FF7: Crisis Core: Can I have a Piggyback Uematsu?

After hearing “the Price of Freedom” a couple times I decided it was about time I finally gave the full soundtrack a listen through. Before hearing it my initial thoughts still echoed after listening to the soundtrack and reading the plot: are we really still doing this? At ground value, it’s about time they stopped “milking” the Final Fantasy VII cow to death… no really. Uematsu left square already because he didn’t like square’s new facilities, but I wouldn’t hold it against him if he resented the reskinning as much as any intelligent gamer (not that he has a choice since he doesn’t have rights to any FF music).

Now before I get any further I just want to state that I’ll get my ranting out first because I believe that although Crisis Core is one too many, fresh composer Takeharu Ishimoto deserves a fair chance to be considered despite square’s decisions.

END_OF_DOCUMENT_TOKEN_TO_BE_REPLACED 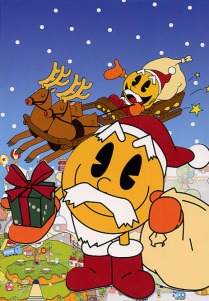 Merry Christmas To All And To All A Good Nomb

Merry Christmas every one (and a Happy Holidays to everyone who doesn’t celebrate Christmas)! Today is a day of giving, one where we are to give to those that we care about. Here is my gift to Continue? a music video of Final Fantasy VII put to a great song by Trans Siberian Orchestra, Carol of Bells. Enjoy!